Moving the Tagger Microscope Along the Focal Plane 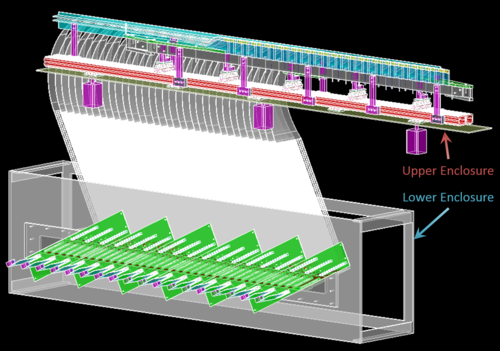 Figure 1: CAD image of the upper and lower enclosures of the Tagger Microscope made during the design phase. 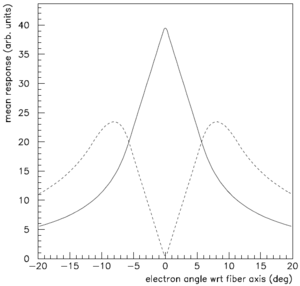 Figure 4: Result of a MC simulation performed to predict the response of adjacent scintillating fiber columns due to fiber axis misalignment with respect to a post-bremsstrahlung electron's path. The solid line represents the response seen by the central fiber, while the dashed lines are the adjacent fibers' response.

The tagger microscope (TAGM) consists of six major components: upper enclosure, lower enclosure, optical fibers, electronics, shielding, and darkening shroud. As seen from the CAD image above, Figure 1, the lower enclosure houses the microscope's electronics, while the upper enclosure contains the optical fiber bundle supports (a.k.a. popsicle sticks). The bundle supports are used to align the scintillating fiber (SciFi) longitudinal axis to the incoming electron's path angle as it passes through the tagger magnet's focal plane. The designed angular tolerance, e.g. fiber to electron allowable angular error, is < 0.5o. MC simulations were performed to test the effect of various amounts of misalignment between the electron angle and the SciFi axis. Figure 4 shows a plot of one of these simulations with the solid line showing the scintillation response of the central fiber, while the dashed lines are the response for the adjacent fibers. A factor of three separation between adjacent signal amplitudes is achievable when alignment is < 3o. In order to achieve optimal alignment, similar to < 0.2o that was seen in bench tests, the SciFi end of the optical fibers are affixed to bundle supports (Figure 5) in the upper enclosure, with the light guide potion of the fiber extending down to silicon photomultipliers (SiPMs) located on preamplifier boards (Figure 6) in the lower enclosure.

Moving the TAGM to a new energy range not only involves the physical relocation of the microscope and its shielding along the tagger magnet's focal plane, but also requires internal realignment of the fiber, which is the subject of this page. The realignment of the scintillating fibers' longitudinal axes requires all 17 bundle supports to have new, individual crossing angles (β angle) with respect to the focal plane. These angles are derived from a table generated based on a TOSCA map of the post-bremsstrahlung electrons' crossing angles as they pass through the magnet's focal plane. Since the crossing angle changes with energy (e.g. displacement along the focal plane) each bundle support will have a slight "kick" or "tow" from the adjacent bundle support. The tow is typically on the order of 0.1o.

Since the bundle supports have varying β angles, the parallel railing system that holds these supports in place are no longer representative of their namesake. That is, the front and rear rails of the parallel railing system are not parallel to each other and have a pitch with respect to one another. Figure 7 is a pictorial explanation of this and shows that for two equal length rails (front & rear), the length of the upstream and downstream alignment bars differ by 0.039 ± 0.001 in. at a starting photon energy (Eγ) with a required tow of 0.09o between bundle supports. For each individual photon energy range covered by the microscope, or more simply stated for each energy that the microscope starts at, a new pitch for the parallel rails must be determined and three components (upstream alignment bar, downstream alignment bar, and upstream guide plate) unique to that starting energy must be fabricated. For this reason CAD drawings, an Excel spreadsheet, and this wiki page were created to provide the information needed to realign and move the TAGM to any starting photon energy between 11 and 5 GeV. The turnaround time for the machining components is typically five to seven days, while the realignment of fibers will take no more than two days with inexperienced workers.

Figure 7: Pictorial representation of the alignment of the front and rear rails of the parallel railing system, which supports and aligns the optical fiber bundle supports along the tagger magnet's focal plane. The red circles represent the locations of the support rods that extend below the bundle supports and are used to secure them to the railings. This representative image was created from a 3D CAD drawing of the microscope which has a precision of ± 0.001 in.

Figure 8: The three coordinate systems often referred to in association with the Tagger Hall. (Image taken from a Dan Sober Presentation)

In Spring 2017 a survey of the various beamline components saw a small change in the Tagger Microscope position. The Microscope (upstream center) position derived from this survey is shown below and includes a magnet center shift from previous measurements.

The Tagger Microscope (TAGM) contains 17 optical fiber bundle, each consists of a 5x6 array of 30 fibers for a total of 510 fibers (5 rows, 102 columns). Figure 2 below shows the fiber array as viewed by the electrons passing through the tagger magnet focal plane. Each optical fiber consists of a 2 mm2 x 2 cm BCF-20 scintillating fiber (SciFi) thermally fused to 2 mm2 x 165 cm BCF-98 light guide, see Figures 3 & 4. The SciFi end of each fiber is thermally bent into an "S" shape to remove the fiber from the electrons' path soon after passing through the SciFi, see Figure 5. The fiber begins its bend out of the electrons' path after only 4.5 cm. This length provides enough material past the fused joint to minimize strain on the joint resulting from the bend and fiber mounting straps, while also reducing the material in the line-of-fire that could result in backscatter. 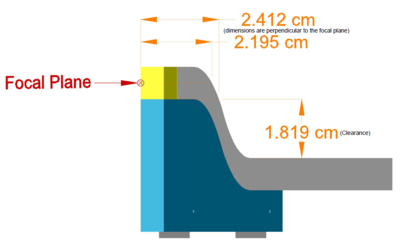 Figure 12: CAD image of a bundle support (blue) with a mounted 5x6 fiber bundle. The 'S' bend minimizes the amount of fiber in the path of the electrons.

Placing the "Pivot Point" on the focal plane and only allowing +0.5 cm towards the tagger magnet the maximum crossing angle for the current bundle support design is βmax = 19.51o, while the minimum angle is βmin = 4.05o. This does not account for the most forward bundle mounting strap clamp and bolts, but they are lower in ZFP than the fibers and should not extend significantly past the 0.5 cm limit even at lower β angles.

Up to 17 bundle supports can be mounted on the parallel railing system and instrumented in the TAGM. As the range of photon energies being tagged decreases (e.g. electron energy increases) the crossing angle (β angle) of the electrons with the focal plane also decreases. The smaller the β angle the more space along the XFP axis a bundle support will occupy. Below an Eγ of 6.5 GeV (β = 9.5o) the length of the parallel railing system can only mount a maximum of 16 bundle supports.

Once the β angle for the first (upstream) bundle support is set, derived from the the starting photon tag energy, each subsequent bundle support has a β angle offset from the previous one by a tow angle. Thus, as we look downstream from one bundle support to the next, the β angles differ by -(tow angle). Adjacent bundle supports will come in contact with one another at the SciFi end and form a triangular gap along their adjacent sides based on the tow angle.

A summary of the spreadsheet calculations is on the following wiki page:

Figure 16: Sketch showing the path of electrons that pass through the center of the fiber columns near the focal plane. At the back-end of the 2 cm. SciFi a misalignment of around 0.03 mm (with respect the the fiber's axis) results from using an averaged β angle for the bundle support location.

Using the calculations explained in "Calculating the move" wiki page, the following parameters for a 6 GeV maximum tagged photon energy were determined.